Hong Kong and Shanghai. Two of the most well-known metropolises of Asia, and the world. Just as with any mega city, there are some attributes that these two share with every other (population density comes to mind). But it doesn’t take much exploring of either to discover characteristics that make one uniquely the “city on the sea” and the other the “fragrant harbor.”

Having spent three years living in one, another year living in the other, and several months juggling back-and-forth trips to live in both cities, I’m well acquainted with what awaits visitors who are setting foot in these metropolises for the first time.

When arriving in either city, some of the observed differences will be readily identifiable. For instance, the society, buildings, and language will be very different if you’ve grown up in the English-speaking world. What may be less apparent are the habits and customs of the local people, the unwritten codes of conduct on public transit, and even popular weekend activities. This article will incorporate some of these apects as a guide that may be useful for anyone traveling to Hong Kong, or Shanghai, or both.

Let’s start at the beginning, with the basic geography and municipal structure of each. Shanghai is a massive city (6,300+ sq.km. and over 24 million people) guilty of sprawl that shuffles the city center across several main downtown districts. The locals (called Shanghainese), foreigners, and the migrant population (both educated and non-educated workers from other parts of China but who do not hold a residency permit in Shanghai) are mostly divided between districts that follow predictable “financial fault” lines.

The wealthy, middle-class, and many foreigners tend to live in the main downtown areas of Jing’an, Xintiandi, Xujiahui, the Bund area, etc. Further out, where daily commutes on the metro system can start to approach or exceed one hour, the buildings become smaller, older, and more affordable for the average Chinese family.

The city itself is mostly uniform in one aspect, and that is the topography. Shanghai is a vast city spread out along a continuous flood plane.

Hong Kong, conversely, has been built on top of and in-between hills that cover the region. The combined land area of Hong Kong totals about 2,755 sq.km. and is home to around 7.2 million people.

One of the three main sections and city centers is Hong Kong island—a popular choice for wealthy locals, high-level foreign managers, and rich Chinese from the mainland. Another key area is Kowloon, well-known for tourist shopping destinations as well as office towers for local and foreign companies.

The third area is called New Territories, which stretches across the north of Hong Kong and borders with Shenzhen. Those earning lower incomes—locals and foreigners—must often look to New Territories for more affordable housing options.

Both cities are relatively well-stocked with foreigners and English-speaking locals who like to gather at pubs, night clubs, beaches, international school annual events, and beer festivals throughout the year.

That being said, the two metropolises are not just magnets for English-speaking populations. Indeed, an interesting find that travelers will be surprised to stumble upon is the different ethnic sections of both cities.

These come in all shapes and sizes: from large areas like Korea town in Gubei, Shanghai, to a single building like Chungking Mansion in Hong Kong. Stumble into either to immediately experience a very different cultural feel and for some truly authentic, non-Chinese cuisine.

Other, more exclusive areas in both cities are a few residential communities that are far-removed from the center, placed in aesthetically pleasing and well-manicured neighborhoods, where Western suburban-style living has taken root.

In the far eastern reach of Shanghai, even past the Hongqiao airport and train station transportation hub, there are gated communities of three-story homes with front yards and personal garages.

In Hong Kong, there are beachfront condo communities such as Discovery Bay. There isn’t much in the way of public transit to these communities, but that hardly matters when you have a personal driver on call!

For everyone else who does not have the budget for such exclusive living, the cars and/or bikes are parked deep underground, in the bowels of their tall apartment towers above.

There are no private backyards, but small green spaces in between the buildings and as part of the complex.

Here is where Shanghai has an advantage.

At the macro-level, Hong Kong’s access to hiking and watersports makes the city obviously more conducive to outdoor activity. However, at a micro-level, when walking around Hong Kong there is a greater awareness of concrete and steel.

Sometimes it feels that the only greenery scattered around Kowloon is those small trees and bushes that are planted in large, decorative pots along the alleyways.

In Shanghai, on the other hand, there are real trees planted directly into the ground. Shanghai has done a much better job of spreading green throughout, with tree-lined streets in the Former French Concession and Jing’an area, and the larger public spaces at residential communities (owing to a greater availability of land).

Dogs in Hong Kong have little choice but to do their business directly on the sidewalk, while dogs in Shanghai can at least take aim at a tree!

Of course, a pleasant outdoor environment doesn’t necessarily require greenery. With regards to open-air sightseeing, both cities have tremendous skylines that can be viewed across a major water feature.

Try to schedule time in your trip to take-in the view of both skylines during the day, as well as at night. The view of The Bund architecture in Shanghai when highlighted by the city’s night-lights is absolutely amazing.

Equally impressive is the numerous skyscrapers of Hong Kong island framed against the green backdrop of Mother Nature’s hills with a blue sky above.

Another aspect that both places have in common is a great subway (metro) system.

Travel by metro is quite affordable and most trips last only 10-30 minutes depending on distance. The trains run with familiar regularity and at intervals that are almost never interrupted.

Shanghai’s metro usually shuts down between 10 and 11pm, while Hong Kong keeps the trains moving till around 12:30am, which might be a sign of different public sector opinions of nightlife.

When seeking transit outside of those operating times or when not conveniently located at or nearby a metro stop, there is Uber (and similar, locally produced versions). Taxi-hailing app use is widespread in both cities, but you’d better be able to offer navigation instructions in Chinese!

Spending an extended period of time in a city yields certain advantages of becoming more localized and familiar, but can also lead to an emotional let-down similar to ending a “honeymoon phase.”

The close of the “tourist phase” can be thought of as that moment when you realize you are no longer “traveling through” and “exploring” a new city or region, but that you are now leading a “working” lifestyle that has grown to become routine.

This feeling is not immediate. It follows an unspecified period of time needed for adjusting to newness, not unlike the expression, “the honeymoon is over.”

When arriving to a new city, even on a full-time employment contract, there is invariably a lengthy period of time for pure wonder. Every street corner glistens with newness in your eyes and provokes curiosity.

This feeling is one of the strongest allures of travel. But, given time, all good things must end and the “new” shine on those street corners eventually fades away revealing just another traffic jam delaying your morning commute to work.

Eventually, people expect you to be a functioning, productive member of their society who doesn’t spend working hours planning weekend travel plans, but who instead fills weekend time with work-related conversations.

Once localized to a new city at the end of the “tourist phase,” you begin to become acutely aware of the organization and management of your surroundings.

Your first flight delay in a China airport will be a good indication of what is lacking in terms of organization. Whereas Japan is well-known for quality control and a deep, social commitment to providing good service at work, China seems to be lacking a unifying management philosophy.

For travelers, this becomes apparent in the little to no flexibility within the “system.” In both Shanghai and Hong Kong, service employees are only trained to complete their specific job functions for their 8-10 hour shift.

Make any special or unusual request and you’ll be met with a blank stare, followed by a “let me ask my manager” response. But don’t hold your breath for a favorable reply.

Instead, take in all of the service “let-downs” as part of the overall experience, and just go with the flow.

To be sure, every city has its own unique flavor and charm to make it entirely its own destination on the map. The charm that belongs to Shanghai and Hong Kong make both worthwhile to visit and re-visit for new or experienced traveler alike. Just be prepared to move on to the next destination when you begin to feel that the “tourist phase” might be coming to an end.

Trying to determine the pulse of a new city can be overwhelming. Remember, when you start to feel flustered while making your own investigations, just stop, look around, and gauge the local traffic.

The general pace of pedestrian traffic in Hong Kong flows at a rapid “move it or get run over” speed, compared to the more leisurely stroll that Shanghai takes. When walking around in Hong Kong, you better be moving like an agile ninja squirrel.

If you drop something, think twice before taking the risk to stop and pick it up, cause there’s a train of people right behind you. In Shanghai, you can be much more at ease. Stop to pick up that loose change, stop to have a chat, heck, even stop at the top of an escalator entrance to debate with your companions if it’s moving in the desired direction. No one will mind. And why would they? We’re all gonna get where we are all going, eventually. -Sean Doherty is a Colorado native and graduate of Metropolitan State University, living and working in Hong Kong. In 2016, Sean received a Masters of Science degree from Hong Kong Polytechnic University. 4 thoughts on “Hong Kong vs Shanghai – An Expat’s Take” 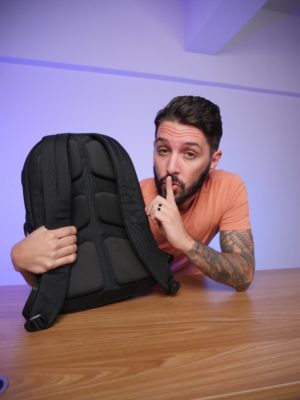